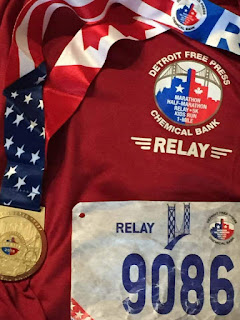 I all but stopped running for a couple years. I am now 7+ weeks into a running comeback. It is going pretty well, but "starting over" is tough. Progress is slow, but certainly noticeable. Getting better. If I keep it up, I should be in decent shape by spring. My past goals are still my goals. I'm older, I'm wiser (?) and I'm back. 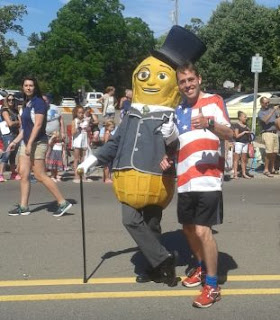 This is me with Mr. Peanut. Mr. Peanut's handler watches me with distrust if not outright disdain.

I still run. Not as much or as fast as I would like, but I run.

I don't blog much.

I'm back, or should I say I'm still here! 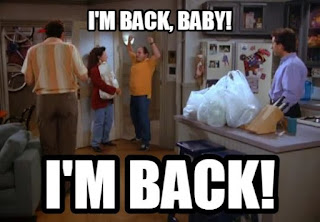 When last I posted, there were a lot of unfortunate things happening with dear members of our family and, although they didn't end well, we are recovering. While I never stopped running (there was a zero run week or two), it was just enough during the spring and early summer to not lose all of my fitness.

I did manage a couple races while doing a modest amount of training. The half marathon relay with my friend Shane at Rock CF went pretty well and we ended up 5th overall for the relay. I paced the Martian half marathon in Dearborn in April. At the time, I hadn't run more than 8 miles all year, just doing the miles was a challenge. I was assigned the "slowest" pace group, but running for 2:30 is still a long time. I ran a 5k with my kids in early May, followed later in the month by a "last minute" 5k in Indiana where I ran under 24 minutes and the Dexter - Ann Arbor 10k, where I ran dressed in a pineapple outfit. Really! I ran with my Kona pal Larry to help promote a couple Kona races (Strawberry run and Kona Run). I ran both those races, running Kona Run as a 5k pacer with my kids and the Strawberry run as a race (where I had a pretty bad showing). This was somewhat understandable. I didn't run for a week before and just had a pretty rough workday (I think it was on a Thursday evening). I guess that is more than a couple races.

I only felt like I was "back" to running consistently at the end of June. Strangely enough, a vacation seemed to help me get back on track. I was able to run with some very nice scenery in northern Michigan and having the time and ability to run most mornings was great. July went OK and, for whatever reason, something seemed to click the first weekend in August. The runs weren't particularly fast that weekend, but they just felt "right" again.

I decided to run another "last minute" 5k  I found while visiting family in Indiana and finished in 22:49. I have this delusion of having race results faster than I really do, so I was surprised to find out that this was my 2nd fastest 5k time as an adult. It was a small race and I won my age group (though I was beaten by a 10 year old boy and 12 and 13 year old girls, because what is a race without being smoked by the very young or very old?) Despite the whoopin' by the youngins, I was encouraged by my progress. Fast forward to this weekend and I ran a 22:30 5k in practice (I ran hard, but could have went faster in a race) and then today ran my fastest practice 10k ever, while running at what felt like a moderate pace.

Hopefully, this progress continues and I will be in a good position to do well in what ended up being my "goal" races for the year. At the end of September, I will run the Brooksie Way 10k as part of a team for work. I think, as long as I stay healthy, anything less than a PR would be disappointing. Then, I will be running the first leg of the 5 person relay for a "Mixed Masters" team at the Detroit Marathon. My leg is just over 10k. I am excited for both races. I really like being part of a team for these races. It adds another element of fun to the racing concept. Assuming all goes well, I anticipate being involved with other team / relay events in the future.`I am also enjoying running shorter distances. 10k may be my new jam. 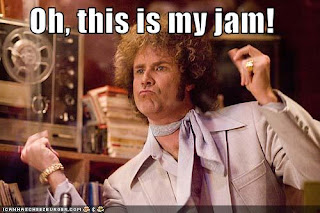 I guess that gets everything up-to-date. How is everyone else doin'? :)