I had a good run this morning. 7 miles at a pace which I would describe as my "Half Marathon" pace. It was probably my best "long" run in over a month. I got out early before it got too hot and was able to keep a fairly consistent pace, although I was a bit faster at the beginning and end of the run. Overall, July has been a disappointing month as far as running between vacation and the heat. I don't think I took a step back, but I didn't progress as I did in June.

I think, as long as I'm not too sore, that I will try to get out again tomorrow morning. I'd love to do a faster, shorter run (more 5k pace) but we'll see.

Ten is a magic number. 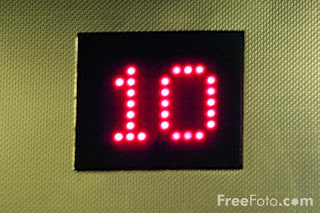 I decided last night that, even though I wasn't back to my normal running schedule due to vacation and hot weather, that I was going to run 10 miles today. So, I did it.

I ran a three lake loop (technically, I probably looped around 5 lakes) around Lotus, Maceday and Williams Lakes. That was good for over 8 miles, then I was creative and ran around until I got to 10 miles.

I went out early and while is wasn't scorching hot, it was warm and humid. I felt good at first and thought I was at a pace I could maintain throughout. However the hills, the humidity and my recent lack of running all probably played a part in my gradual slowing during the run. My legs (mostly knees) were not happy with me beyond about 3 or 4 miles.

Overall, I'm glad that I reached the ten mile mark. I have a month until a ten mile race, so while I knew I could do it, it is still nice to cover at least the same distance as the race.

We're back from vacation. I did do a couple runs during our trip, one at Camp Lael and one at Wisconsin Dells. Nothing remarkable about either other than that they were both a bit hilly. I'm hoping that all these hilly runs I have been doing for the past few weeks are getting me ready for Brooksie Way Half Marathon in October, which is supposed to be a challenging course.

I didn't run a particularly long way (it is nice to now think of 6 and 5 mile runs as mid-distance), nor did I run particularly hard, but at least I did something. Ran a bit this morning too, but it was already quite hot at 8:30 am (I woke up at 6, saw that the news station said it was 78 degrees and fell back asleep. It was in the low to mid 80s by the time I got going.)

My schedule may allow me to get a couple runs in this week. Next race isn't until the Warrior Dash Indiana in about 3 1/2 weeks. I plan to do a 10 mile run this weekend if all goes as planned.

Anyhow, I decided to run a timed mile because I had never done so (as an adult). I picked a flat loop in my area to run, did a mile slow run warmup to get there and then went at it. Here it is:


My legs, particularly my quads, have not recovered from Saturday's outing and I didn't follow my usual running morning routine. I think that in a race setting with proper preparation, I would be in the 6:30 to 6:45 range. Still not blazing fast, but better than today.
Posted by protometal @ clippinalong.blogspot.com at 8:36 AM No comments:

I headed out to the park to learn that it didn't actually open until 8 am. Luckily, I saw a runner parking nearby while I was out there and said he parks at this certain location frequently, so I went with it.

I learned early on that I was not going to set any speed records as the hills were brutal. The biggest hills were early in the run and pretty much rendered my legs ineffective. The first mile or so was about the speed I thought I would run the whole trail, but that was far from the case. The bugs were pretty brutal throughout the run (Tip #1 - if you are going to do a trail run, put on some insect repellant) and I was very tempted to turn back by mile 2, but it got slightly better from about then on. And I saw a wild Turkey.

Around mile 3 to 4, I felt like I was settling into a good pace and felt good. That lasted until about 6.5 miles in. There was one particular stretch where between the rocks, hills and distance that my knees started to rebel. It was a struggle to finish for the last couple miles, but I did it. I am happy to say that I ran the whole 9 miles. There were a few hills where I walked near the top in the last couple miles, but I don't consider that "walking". Of the 2 hour, 7 minute run, a max of 2 minutes consisted of this walking (where I probably made as much progress up these hills as "running").

I think this run will probably be the toughest that I will do all year (unless I do it again at some point, perhaps in the fall). It wasn't speedy, but it didn't need to be. It was probably beyond my current capabilities, but I toughed it out and finished strong.