After trying on a couple different occasions (either I read the schedule wrong or it changed), I did my first Spinning class at the gym this morning. When I first heard about spinning, I thought it was more like this: 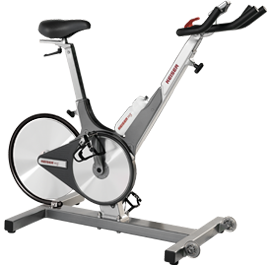 This bike is pretty sweet. I'd like one at home but they run about $1800 or so. The ones I saw on websites had a little computer with distance, watts generated, speed, etc. The ones at the gym had no such gadgetry. It was quite adjustable though. You could adjust the handlebar and seat height, move the seat back and forth and the resistance could be easily adjusted by a little lever near the handlebars. You can use regular shoes but many people in the class had special cycling shoes which attached to the pedals.

I got to the class early and that was a good thing. There were about 35 bikes and probably 32 of them were taken a half hour prior to the class. People laid their towels and stuff on the bikes, claiming them like people used to claim arcade games when they put their quarters on them to say "I got next!".

I didn't want to lose my spot, so I messed around on the bike for a while. It took me a few minutes to adjust it to my liking, then I did a pretty easy 20 minutes on the thing before people started to file in. Once the teacher came in and got situated, she started making small talk with the class and told us to start going. She was talking about different numbers, zones and such. It took me a while to figure out, but she was talking about 2 different things, heart rate zones and resistance on the bike. Heart rate zones are 1-5 and resistance is apparently 1 - 10 based on perceived effort.

We went up and down "hills" and had times when we sprinted. The instructor was good and energetic. The class was working hard but generally quiet. I guess sometimes the people in the class are much more lively.
The class went for about an hour and it went by pretty quick.

It was pretty good for my first class. My personal issue with the class was that I don't ride a bike much (usually just for warm up when I actually go to the gym) and the muscles used for running and those used for biking apparently are not all the same. It is a good thing to exercise different muscles, but my legs couldn't keep up with my lung capacity - unscientifically, I don't think my heart rate was up enough at time throughout the workout. I'm guessing that if I keep doing this, it will be less of an issue going forward.

Overall, I liked it and may try to hit a class weekly or every couple weeks, at least if it is cold out. I really enjoy running and no workout is as satisfying to me as a good run. I hope to try to do one workout other than running during the week for most weeks this year, as I think it will help me.

I wanted to run a couple miles on the mill after the class, but they were all packed (people are apparently keeping up on those resolutions). So, I went to the basketball court and shot baskets for a while and came back. Still all full. So I started on the elliptical waiting for a machine to open. 5 minutes with no luck, so I was done. If it was 10 degrees warmer, I'd go outside, but 20 degrees is about my limit and it was in the mid-teens this morning. An hour of cycling should be enough for today. Maybe it will be a bit warmer tomorrow...


Do you do cycling or spinning? If so, do you really enjoy it or is it just another workout?

If you have a gym membership, do you ever do classes or just do your own thing?

What exercises do you do at the gym which you believe help your running?
Posted by protometal @ clippinalong.blogspot.com at 4:43 PM 2 comments: