Hope everyone had a great Christmas and we wish you a Happy New Year. With the baby, work, family activities, colder weather and limited sunlight, my running continues to be erratic. Even so, I was able to run a couple 5k races this month and, as a bonus, both were run at no cost to me!

The first was a trail run at Independence Oaks County Park called the Christmas Present 5k. This race was sponsored by ROTPAC and Running Gear and offered completely free entry to all participants (they did offer some shirts for $10 - $12. They were nice but I passed as I have plenty of shirts at the moment). If this race would have cost anything, I probably wouldn't have gone. This isn't because it is not a good race (it is), but I am nowhere near "race shape".

My wife and two of my kiddies came with me to the race and hung out in the shelter where there were two fireplaces going (thus the name of the area, Twin Chimneys). I stayed in there with them until about 20 minutes before the race, where I tried to warm up. It was in the upper 20's and I was able to loosen up a bit before we started. We all lined up at the start of a path past the parking lot and got moving without much delay.

I started off fine as far as pace goes, but started sucking wind rather quickly. Even though I had been running a bit as of late, the running that I had been doing was at a very moderate pace and not near a "short" race pace at all. The first half mile was about 20 seconds off my best 5k pace and it was just downhill from there. Not literally downhill, because the course was a bit hilly and I didn't enjoy them at all. At least no tree beat me this year. I finished in 25:40. This was my slowest 5k time since...well... this race last year. I did get 3rd place in my age group and won a $5 gift certificate at Running Gear, which I will certainly will use.

The other race I ran was the following Saturday at the Jingle Bell Run / Walk for Arthritis in Bloomfield. This was one of many such races run to raise money for the Arthritis Foundation throughout the country. I ran this race because I won yet another race entry from Renewal by Andersen Detroit.

Before the race, I met Dawn and Jeff (aka Detroit Runner) who also won entries from Renewal by Anderson, Matt (Faster than a Turtle) and his wife Janet. It's always good to see people you know at a race!

After hanging around in the gym with the group and Brandon from Renewal by Andersen for a while, we headed out to the starting line. I was hoping to be better prepared for this race than the last, but I was not at all (number of runs between Christmas Present 5k and this race - 0). I was hoping just for a better showing than the previous week. I felt slightly better this race than the last, probably mostly because there were no significant hills in this race and it was on roads rather than trails.

I finished in 24:29 and was surprised that I actually won an age group award. After having some good Tortilla Soup, we waited around about 30 more minutes to collect our awards. Matt and Janet both won their age groups, Jeff came in second in his, and I third in mine (behind Matt).

I don't have much more to add. The races were fun because they were races and were "free", but I was not thrilled with my performance. It was what I expected though, based upon my level of preparation.

My next blog posts will be a recap of 2012 and my goals for 2013. Merry Christmas and Happy New Year!

Because I am a superdork, I must have my own theme song for running and I switch it up every few months. For the first and perhaps only time, my theme song is an instrumental - "Into the Arena" by Michael Schenker.

I like the title and the feel of this song (Into the Arena). I would like to be announced at my next race with lots of smoke, fireworks and lasers all around as I emerge from the tunnel and head to the starting line. Delusions of  grandeur for sure!


Pandora and especially Spotify have helped me find a ton of music I knew little or nothing about. Through it, I've discovered or rediscovered many bands, including UFO and former UFO and Scorpions guitarist Michael Schenker.

I've been running lately, but just enough as not to lose too much. I peaked at the end of September and, due to a great number of circumstances, can't get fully back into any sort of running routine. Baby, weather, laxk of daylight, my schedule, family schedule, all together I can't get any kind of regular thing going, but it's ok.

I did do a crazy run on Monday this week. I belong to a local Meetup group that runs regularly at a local Metropark and the one thing I've been able to do semi-regularly is go to the park on Saturday mornings and run with them. Much of the group is training for a marathon, so they actually have been running 18 - 22 miles and I join them for the middle 8 - 10. Anyhow, one member posted about a night run at the Pontiac Lake Rec Area. Since it was so warm (60 in December is tropical), I figured I could go. 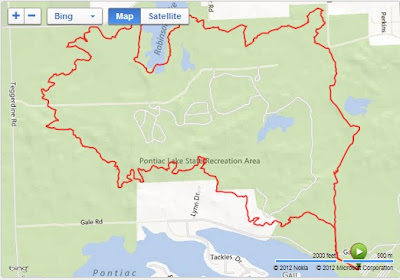 Since it is an almost 10 mile trail with no light, I picked up a headlamp after work and got ready to go. I knew this was going to be a challenge, 'cause it was very long for an afterwork run, on a rough trail where it would be damp and dark. I could use an adventure. I met 3 others at the park and after a couple minutes we were off. Not more than a couple minutes into the run,, I had my first fall. I tripped on the edge of the road (not even yet to the trail). I fell "well" and kinda rolled into it. I wouldn't be my last fall...

We were going along pretty well for a while. Because it was dark, there was very little warning when obstacles like roots and rocks were coming. I had almost fallen at least a half dozen times coming up to the 3 mile mark when I came upon the rock garden. There were lots of wet, slippery rocks and I went down pretty hard. I hit below my left knee and my left palm particularly hard. Thankfully, there were people there to make sure I was OK. Being out in the woods, no where near a road, I would have been SOL if I was hurt badly, but I was alright.

If I would have had much of a choice, I would have been done running for the night at that point, but I wanted to finish and also didn't have much of a choice other that to go 3 miles back or 7 miles forward. We walked along (I limped for a bit) for a couple minutes, then I managed to run again. We probably went a bit slower than planned, but it was ok. They let me lead so I could keep the pace (and probably to "find" the obstacles first). It took about 2 hours total, but we made it. I felt a mix of accomplishment and pain.

My knee and hand were pretty bruised and once I got home, noticed that my knee was pretty skinned up. My upper legs were also sore for 3 days but I am now mostly recovered.

I have 2 races coming up: tomorrow at the Christmas Present 5k (free race by Running Gear) and next weekend for the Jingle Bell Run for Arthritis 5k (courtesy of Renewal by Andersen Detroit contest). I have no idea what to expect. While I always hold out hope for a magical PR to fall from the sky, I'd be happy to keep the first race around 24 minutes and hope that the second, flatter race is a little better. We shall see!

Into the Arena I go!
Posted by protometal @ clippinalong.blogspot.com at 6:26 PM No comments: