Another year has come and gone and it went all too fast. Like the last couple years, I feel like I need to look back on my year in running for this blog to see how it went and to see where I'm going. Let's start with my progress on my goals I set last year:

I started out the year not running nearly enough and never really dedicated myself to any sort of speed work program. As a result, I would classify most of my 5k race times as rather disappointing. I only broke 23 minutes once and that was early in the year. I was hoping to at least PR (beat 22:16) at the Open Door Julie Run in June, but had a poor race and ran 24:02. There were a couple age group awards, but the 5k distance was largely forgettable this year.

Result: No sir or madam. 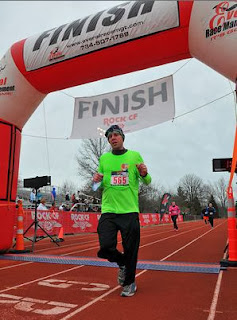 I ran three half marathons in 2013. Two were in the spring and one in the fall. The spring ones, Rock CF and Martian, were done without nearly enough training. I learned this year that you can't run once or twice a week and expect to improve or even maintain. I was able to PR at my fall marathon, The Brooksie Way, with a time of 1:48:18. I had been training prior to that race, but it wasn't my focus at the time (I wouldn't have had a long run of 20 miles the week before if this was my "goal" race). I am happy I beat my time from last year.

3. Complete a marathon, beat Subway Jared by one hour.

Result: Complete marathon, Yes! Beat Jared by one hour, no. 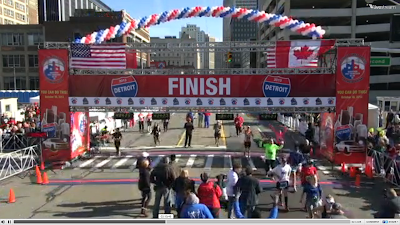 I am the fluorescent yellow / green spec with arms raised.

I worked hard to ready myself for the Detroit Marathon this year and had a good 16 weeks of training leading up to the race. I don't think I would have changed a whole lot about the training, especially since I started "from behind" due to a less-than spring.

I had the part where I would beat Jared by over an hour "in the bag" (heck, I had 3:50 something in my sights) until my legs really gave out around mile 17 / 18. I had zero plans to walk at all for this race, but I needed to walk / run the last 6 miles or so. I'm happy I finished and accomplished something, but the finishing time was slower than I had hoped for.

What I said:. "I believe that my marathon training will get me close to this goal and, as long as I keep it up in the cooler months, I should make it."

The marathon training did get me close, but the amount of running I did both early and late this year was much less than anticipated, leaving me 142 miles short.

Say whaaaaa? I didn't officially meet a single goal, but I still count 2013 as successful. I ran more miles than any previous year, I set PRs for the 10 mile, half marathon and marathon distances (first races are always PRs) and still enjoy this sport / passion / hobby / sport. Though I will be 40 in 2014 (YUK!) I maintain that I have a ton of potential and plan to continue to improve in the coming year and many years to follow.

I have put the following summary into my year-end blog post the past couple years, so I'll continue while adding this year's results:

Other Notable Items from 2013:

After welcoming a baby in late 2012, my life has again changed for the better, but keeping up with running has been more difficult. With a busy family schedule, it isn't easy finding time to get out and go. As a family, we'll need to continue to be creative in the coming year to make time for running / exercise.

The next post will be about my goals for 2014. Onward and upward!
Posted by protometal @ clippinalong.blogspot.com at 7:25 AM No comments:

Both my running and my blog posts have really been lagging lately for various reasons. The longest I think I've gone without a blog post is a bit over a month, so I thought I should write something. 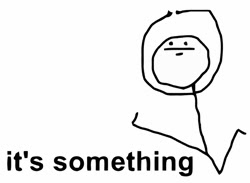 As far as running goes, life in general has not been accommodating to my running schedule. We had to travel for a family issue last week and there has been a load of scouting, church and other social activities going on. I don't feel like I have any time to do anything workout related and, in the rare cases where there may be some time, I just don't feel up to it. Sounds like a lot of excuses to me.

In the first 20 days of December, I have run a total of 13 miles and none at all in the past week.I think my low mileage month since the running comeback was something like 30 last December or 33 in January. I'm hopeful that, with some time off work, I'll be able to get some exercise in. I used to be worried that I would quit if I had too much of a lapse. That isn't a concern anymore - my desire to run is as much as ever - but I just need to get back into a good rhythm.

Next post will be better or your money back!