The 2014 Chicago Marathon is in the books and it was the best, worst, most exciting and most frustrating race I've ever run. Since I haven't posted for about 5 months, I'm going to hit a couple items before the race itself including training, the Brooksie Way Half Marathon and the "taper' leading up to the race. 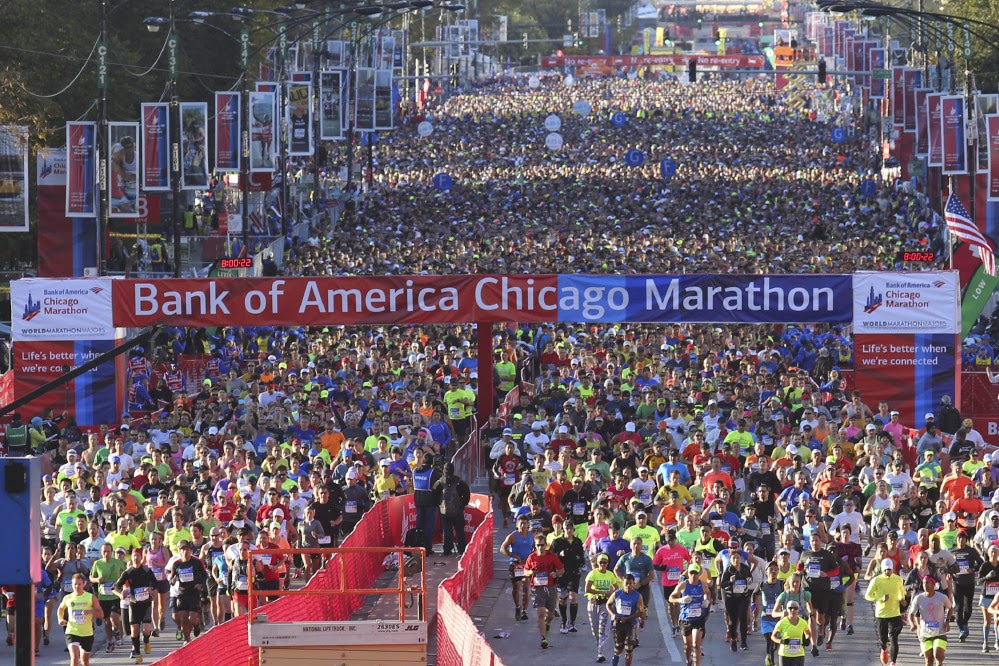 
Training went exactly as planned as I followed the Hal Higdon Novice 2 program as closely as I could. I missed 2 or 3 individual, mid week runs out of the entire 18 week program. My longest runs included an 18 miler on the Clinton River Trail and 19 and 20 milers at Kensington Metro Park. All of my long runs except the 20 miler were just as I expected them to be. During the 20 miler, I experience a recurrence of some ankle pain, but overall, the run was fine. I was trained to meet my 4 hour goal.

Two weeks before Chicago, I ran the Brooksie Way Half Marathon. I signed up for this race long before I was certain I would run any marathon this year. Because it was so close to the Marathon, I decided to take it easy for this race. While I didn't go as "easy" as planned, I did run it close to what I thought was my marathon pace and finished in 1:52 and some change. It was about 4 minutes slower than last year and I felt pretty confident that if I would have fully "raced" this one, I could have PR'd and beat my 1:48something time from last year. Everything was on schedule.

There was nothing wrong with my 3 week taper. I did what I was supposed to to, except, right after the Brooksie Way, I got sick. It wasn't a bad illness and it was confined primarily to sinuses and throat. No chest congestion or congestion in general. I seemed to be getting better after 4 or 5 days, but it reached a certain point and did not improve. I could breathe, but I had laryngitis and a dripping in my throat that produced occasional coughing and just general mucus goodness (sorry). Even so, I got most of my taper runs in and thought I would be fine for race day.

The whole family traveled to Illinois for the race. We stayed with my Dad in the SW Chicago burbs and on Saturday took the train into the city. Neither of us (my wife and I) had taken the Metra train into the city before, so it was a new experience. The ticket counter was closed, but we soon found out you buy your ticket on the train (take cash). On weekends, a weekend pass is $7 each, a pretty good deal where you can ride all you want on the system with that pass (individual rides from our location are normally $5.50 each way). So, we got 4 trips each (to city and back) with the pass.

The expo was huge and quite busy. The bib pickup system was pretty sophisticated. They scanned a QR code on your participant guide and sent you to a station where they scanned it again. Then, you went elsewhere to pickup your shirt and bag. We walked around the expo for a while, but with as much walking as we had already done, we didn't hit everything. We were able to take some shuttle buses, but in all, I bet we walked almost 3 miles total Saturday. We accomplished our main goals of getting my bib and figuring out if the train would be a good way of getting to the race (it was). We got back to my Dad's, had a unique dining experience, had some cake for some birthdays (my girls) and got to bed.

I set the alarm, but it was not necessary, as I awoke before 4am. I followed my normal race day routine of showering and eating a small bowl of Cheerios (I'll spare you other steps) and we made it to our 5:15 am train which got us to the city by about 6:15 am. I walked with my wife and Dad to about where they would be on the course and headed to the start line. There was a minor backup with security, but it wasn't bad.

I went to my corral group (C & D) and was able to visit our porta potty village for some last minute maintenance. Thankfully, I made it to the area before it got too busy - 15 minutes later and I would have been outta luck. Weather was perfect (low 50s, no rain) and I was able to keep my throwaway shirt and pants on until just before the corrals closed and the race started. I was ready to start with nearly 45,000 of my running brethren. The hand cyclists and elites started first, then the corrals were released. We got to the starting line about 9:30 after the elites started.

I felt good as we started out, under a building and then over a small bridge. There were minor elevation changes, but this course was about as flat as you can get. Early in the race I was happy to head out just under my goal pace (just under 9 min / mile). My first inkling that I was not going to have the best day was by about mile 3. I was feeling a lack of energy and my body's heat management system seemed a bit off. As "easy" as I was running, I shouldn't have been sweating like I was (profusely). Even so, I felt like I could keep it moving. I wouldn't meet my 3:45 "fantasy goal" or my 3:50 "having a really good day" goal, but 4 hours was still in my sights.

I wrote my name on my shirt, at the suggestion of my sister-in-law, and it created a pretty wild situation for the entirety of the race. The number of people who were cheering for me, by name, was incredible. For the most part, I liked it. I didn't like that it was more difficult to pick out my family and, later in the race, I wasn't as much in the mood to acknowledge my supporters.

By about mile 8 or 9, I came to the realization that even beating 4 hours was not likely to happen. I was still "on pace", but just barely. I still thought I could PR and beat 4:17 at this point. My goal was to stay below 2 hours for the first half of the race, which I was able to do. I saw my family right around the halfway point and waved and blew some kisses their way. "Just get to 16.2 - then it's just 10 miles..." Then it was "just get to 20, then it's just a 10k left!". My energy was low and my trick ankle was hurting badly, but I made it to mile 20 without a walk break. Once I hit 20, it was all about "survival" and finishing. Even a PR looked unlikely and all I wanted to do was finish,

I did a walk / run combo from there - probably 2 or 3 parts running to 1 part walking, but it wasn't timed or anything. I set mini goals until the end of the race. Get to that sign. Run through Chinatown. I think I ran the entire last mile. I certainly ran the last half mile plus.

I finished in 4:29 something, Not close to my goal and I didn't beat my previous marathon time. I wasn't upset with my effort though - it was the best I could do while dealing with this cold / allergy / whatever it was. It affected me for almost a month. I was upset that I trained well, did all I needed to meet my goals, and a stupid cold blew it all up.

I am finishing this post that I started in October now in January. Reading back over what I wrote, I still have disappointment over the results of the race. It probably led, in part, to my running funk that I've been trying to get out of for about 3 months. (That will likely be a separate post). Just finishing the race with how I felt was an accomplishment, but it also felt (feels) like 4 months of work down the drain.

I've decided that, for 2015, I'm not going to run a marathon. Actually, I'm content to run 5ks and 10ks and would like to PR both distances, if I can ever get my act together...