I think I found a really good metaphor for my running adventures this year. My running is like a slot car set. 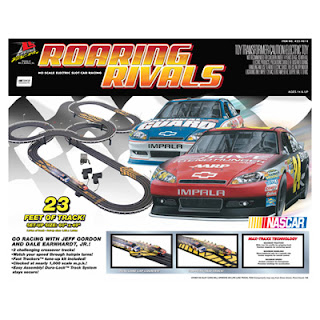 If you ever had a set like this, you know that they are fun, but it's a pain keeping them on the track once they get going. You can keep the cars going around the track slowly, but once you give 'em some more speed, they tend to fly off the track. So you adjust the track, try to get the speed just right and you can get 'em around the track several times. Then, as soon as you think you have it down, they fly off the track for no good reason.

This idea popped into my head for some unknown reason as I was completing my after work run of about 5k this evening. I have no idea why I thought of it, but I was remembering a set my brother and I played with when we were kids. I was thinking it was a "Dukes of Hazzard" set, but after I while realized it was more like a "Smokey and the Bandit" type set with the Trans Am with the screamin' chicken on the hood and a police car.

My running activities have been like running a slot car. I get on track, think I'm moving along pretty well and *CRASH* I get out of the groove and fly off track. I think I'm on track and moving at a decent pace at the moment, but hoping that I can keep moving.

One thing I think I will need to do is to start running in the mornings before work rather than after work. Lately, by the time I get home, I have just been exhausted, probably more so mentally than physically. While I am often able to do something, something is all I can do. Today's run was a 10 min / mile dirge. For someone who thinks that they can run a 20 minute 5k and has their eyes set on a minimum of a 22 and change minute PR for a 5k in 5 weeks, this isn't a great thing.

On the good side, I had a decent race a couple weekends ago at the Miles for Mason 5k, winning my age group and finishing 8th out of 196 people. My time of just over 24 minutes wasn't great, but this was a somewhat hilly trail race and not your normal road race. The kids did well in the race (they were the ones who wanted to go). J Man did the mile race in just over 8 minutes, which was surprisingly fast. He's in 2nd grade, but kept up with the 5th and 6th graders.

Baby is getting crabby and sleepy, so that's it for this post. I'll try to do more in the near future. :P